Everyone at the Chicago Electric Boat Company is one big family, mostly because of the familiar faces that keep returning year after year. We love that so many crew members return to work with us over the summer season and, just like any happy family, we are always excited to welcome new members into the fold. This summer we have 5 handsome crew members to introduce you to, so get ready to meet the 2016 Rookies!

Declan certainly wins the award for traveling the farthest to join our crew family, he comes to us all the way from Ireland! He was drawn to the job because he thought it would be a fun way to meet people and the Chicago River is a great way to see the city. Declan says the  hardest part about his job is the orientation because there are so many things to tell guests before they head out and he doesn’t ever want to forget anything – though we’re guessing guests don’t mind listening to his Irish accent tell them about safety features and tips. Like many others, Declan’s favorite boat is the Tizzy Lizzy , but he likes it because it has the best sound system. Something we bet you didn’t know about Declan: he has played the drums since he was nine. 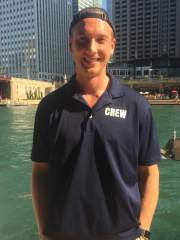 Noah is our newest Crew baby and was recommended by crew leader, Chris. After hearing all about the great people and fun work environment at our docks, Noah decided it would be a great way to spend a summer before starting his big boy career in the fall. Noah says the most difficult part about his job was learning how to flip the boots, but now he’s a pro. Miss Amy is Noah’s favorite boat because she has classy wood cabinets and tables and is nice and big. Something we bet you didn’t know about Noah: he recently returned from London where he completed an internship in finance.

John isn’t only part of our crew family, he was recommended by his big brother, Tim, who is a Chicago Electric Boat crew veteran. Given John’s love for boats and his glowing recommendation from his big bro, this job has a perfect fit for him. John says the toughest part about his job was learning how to quickly dock the boats but now he’s a natural. Like Noah, John’s favorite boat is the Miss Amy because of her “stylish interior.” Something we bet you didn’t know about John: he lived in Rome for two hears with his family when he was young – che bello! 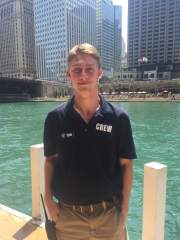 Billy came recommended by several Chicago Electric Boat crew members, both past and present, and what they said about him is true – he’s pretty great. He says it was tough t first to learn all the different things about how to clean each boat so that it is like new for each cruise (we take great pride in our clean fleet!) but he’s a quick learner and is now a cleaning pro. A pontoon lover, it’s no surprise that Billy’s favorite boat is the Auntie Mimi. Something we bet you didn’t know about Billy: he’s had his boating license since he was just 12 years old!

While Matt technically isn’t a rookie, a lot has changed since he was last on our docks in 2014. One of our managers sought Matt out at the beginning of the season and he couldn’t turn down a chance to spend another summer on the Chicago River and such a fun work environment. Like Billy, Matt’s favorite boat in our fleet is the Auntie Mimi because of the open feel it offers as a pontoon. Something we bet you didn’t know about Matt: he’s bilingual and fluent in both English and Polish.